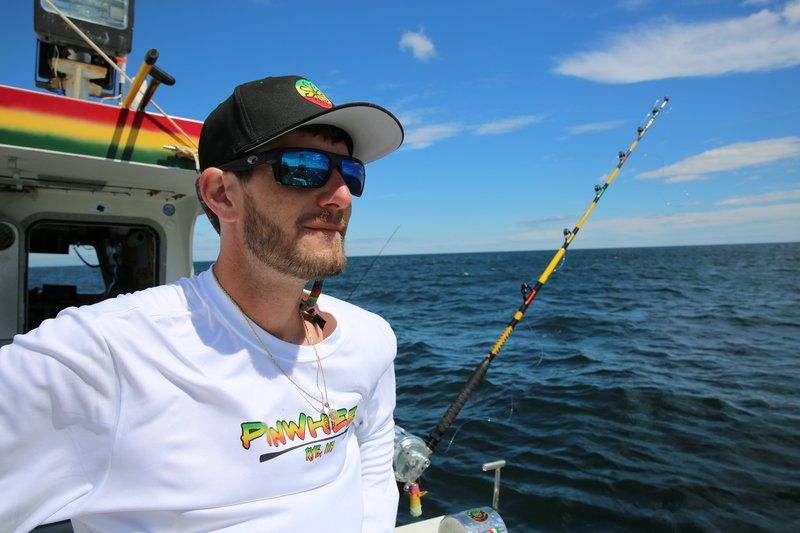 Tyler McLaughlin is an American commercial fisherman, business person, and TV actor. He became the national fame after appearing in the second season of National Geography’s most-watched show, ‘Wicked Tuna.’ The show centers on American fishermen fishing tuna in the Atlantic Ocean. After appearing on the show, Tyler’s good looks and impressive skills have made him the most admired captain of the ship.

Many fans started inquiring about his girlfriend, wife, and relationship status. Thus, in the following article, we discuss wiki info, wife/girlfriend, net worth, and age of the fisherman star, Tyler McLaughlin.

Tyler was born in a family of commercial fishermen in New Hampshire, USA, on December 22, 1987. He is the firstborn child of Marty McLaughlin and has a younger sister named Marissa McLaughlin. Marissa is also passionate about fishing and works alongside her brother. Growing up, Tyler and Marissa regularly went on fishing trips with their father. Moreover, he learned fishing skills and developed a passion for it from a very young age.

Furthermore, Tyler did his high school education at Bridgton Academy in 2007 and went to Nicholas College. He completed his Bachelor’s level in 2011. Since then, he has been into the world of commercial fishing. Born in a fisherman family, Tyler found everything set up at the right place for him. Moreover, he owned his first shipping boat in 2011, a 35 feet long ‘Pin Wheel.’

In 2012, National Geography approached Tyler in the second season of their documentary series, ‘Wicked Tuna.’ It was the start of a triumphant career for the young fisherman. Tyler impressed everyone right from his debut, and he won the season title for catching maximum tuna. In 2021, the show has just wrapped its season 10, and Tyler has remained its integral cast member. He is one of the youngest and most talented captains of ‘Pin Wheel.’  Moreover, Tyler is also the cast of the show’s spin-off series.

Besides TV shows, Tyler is an entrepreneur. He owns his clothing line, ‘Pin Wheel Gate,’ that he sells online through wickedtunagear.com.

Tyler McLaughlin is not married. However, he has recently broken up with his longtime girlfriend, Savannah Tapley. The couple met back in 2015 and shared an excellent relationship. Savannah and Tyler used to be seen together during fishing activities too. Savannah was even close with his family, especially with Tyler’s younger sister Marissa McLaughlin. The news of their breaking came as a surprise for every fan. Also, they did not mention the reason for their separation in any media.

After ending his relationship with Savannah, Tyler is currently involved in a romantic relationship with Shannon Harris. The couple seems to get along quite well. Tyler has shared a picture of him and Shannon on his Instagram @pinwheeltuna on the occasion of Halloween 2019.

Tyler has been in a relationship with Shannon Harris since 2019. The couple gets along very well and spends a lot of time together. Moreover, Tyler consistently posts images of them traveling, fishing, and enjoying holidays.

Shannon was born on May 28, 1989, and has recently turned 32. She belongs to a different profession. She serves as branch manager of Worcester, Massachusetts. On the occasion of her birthday, Tyler shared a beautiful message attached to her picture on Instagram. Tyler finds himself very lucky to have met with her in the first place.

The young captain and owner of the ship, ‘Pin Wheel’ is worth around $500,000 in 2021. He owes this massive wealth to his career in TV and his online clothing business.